The FDA updates available data on a roughly monthly basis. CochlearimplantHELP.com is the only place where you can find this analysis of the failure rates of the different implants.

The United States Food and Drug Administration (FDA) maintains a database of adverse events, the Manufacturer and User Facility Device Experience.  Certain events, such as failure of a cochlear implant, are required to be reported to the FDA.  The FDA has no authority when both the location of the event and the manufacturer location are both outside of the United States.  The events in the database are those which have been reported to the FDA by the hospital or clinic, or by the manufacturer. The information in the database is available to the public.  However, the FDA states: “MAUDE data is not intended to be used either to evaluate rates of adverse events or to compare adverse event occurrence rates across devices.“

Because the data is not intended to be used for comparison, the vertical scales have been removed from the charts below. On each individual chart, however, it is possible to determine whether there were any significant changes in reported events over time.

This study analyzes the suitability of the MAUDE database for cochlear implant reliability analyses.  It concludes ‘…the current structure of the MAUDE database is only modestly useful for analyzing trends in complications and cannot answer several crucial questions, including device type comparisons.’  Here we evaluate trends, but have explicitly obscured the numeric values that may facilitate incorrect conclusions.

Some of the events reported may be medical in nature, and have nothing to do with the reliability of the implant. All implant manufacturers have enjoyed substantial growth in the past 15 years.  A constant event rate looks like a rising curve in the charts below due to the increasing number of units.  A flat event rate indicates an improvement in reliability, because the volume of implants is increasing.

The database is filtered for cochlear implant events, so that events involving other products by the manufacturers are not counted.  Events affecting the internal or external equipment are included in the analysis, as are medical issues that may not be directly related to the hardware. 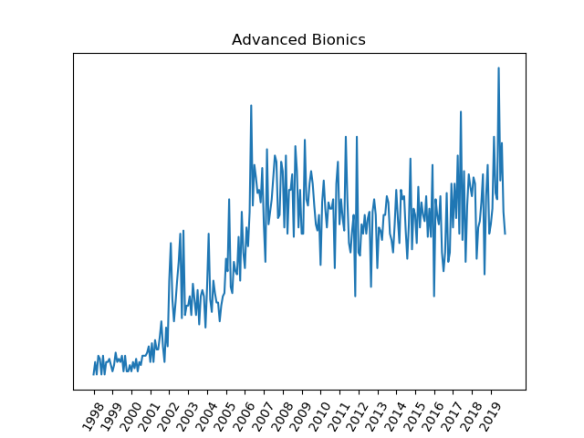 In the chart for Advanced Bionics, there appears to be an increase in events in 2002.  However, the recall of that year was precautionary, and was never shown to be related to failures.

There is a noticeable increase in failure rate in 2006.  This corresponds to the time frame of a hermeticity issue that prompted a recall.  The failure rate since 2006 has fairly flat.  Because the number of implants has been increasing, this indicates a continuous improvement in reliability.

The data for Cochlear shows a steady rise in events through 2011, likely related to the increase in volume.  The increase in incidents beginning at the end of 2011 appears to be related to the hermeticity failure which prompted the recall of the CI512 implant. The CI512 was re-introduced in early 2015. Excluding the large spike in incidents between 2011 and 2014, the failure rate appears to be fairly constant, as the number of implants has been increasing.

The chart for MED-EL shows some anomalous activity in 2004.  This coincides with a Product Import Detention imposed by the FDA due to a documentation issue, and was not related to any quality problem with the product.  Implants continued until clinics ran out of stock, and resumed once the request was resolved. The spike may not indicate an increase in events.  Just before the spike, there are a couple of months with near zero events.  The one-month spike may be an artifact of reporting date getting mixed up with event date.

There is another spike in adverse events in early 2014. This may have been an artifact of submission timing.

Recalls are a very crude method of estimating the reliability of a cochlear implant system.  They may involve a very small number of devices.  Examination of the FDA MAUDE data is a much finer tool.  Past recalls have been resolved to the stringent standards of the FDA, and are not indicators of future reliability.